｜Awaji City｜
Born on the ‘Island of Fragrance’. The Future of Traditional Production Begins with Collaboration

Awaji Island in the Hyogo Prefecture is located in the Seto Inland Sea and is home to approximately 130,000 people.

This island, which has the largest population of any other remote island, is also known as Japan’s largest producer of incense. Driving through the mid-western part of the island, you will see many incense factories, as well as eye-catching signs with the simple tagline “Good-smelling Incense”.

This time, we visited Daihatsu Corporation, which has been in business for 83 years. The  representative director, Chosaku Shimomura, welcomed us with a smile. He is one of the 14 scent meisters and perfumers on Awaji Island. When we exchanged business cards, a fragrance immediately sprang from his card.

Awaji Island, the birthplace of incense in Japan

The culture of scent appreciation has been around for ages. It is believed that the custom of burning fragrant wood has existed in various parts of the world even before the Common Era.

The ‘Nihon Shoki’ (Chronicles of Japan) describes the beginnings of incense culture in Japan. In the 3rd year of Emperor Suiko’s reign (595 AD), an agarwood tree drifted ashore on Awaji Island, and when it was burned as firewood, it gave off a wonderful fragrance that was presented to the emperor. Thus began the culture of incense in Japan.

In the Heian period (794-1185), aristocrats and warriors began to use fragrances on their clothes and armor as a deodorant. In the Muromachi period (1336-1573),  the ‘Way of Fragrance’ became a practiced art, and incense became a part of daily culture for the citizens.

Introduction of Production Technology from Sakai

Though Awaji Island is currently the largest producer of incense in Japan, incense production actually began in the late Edo period. Sakai City in Osaka was the original largest producer before World War II.

During the ‘sakoku’ (national isolation) period in Japan, incense was imported from Sakai, where there was a trading port. Geographical advantages such as the proximity to Kyoto and Nara, where many noble families and temples are located, and the spread of Buddhist altars to ordinary households led the incense industry in Sakai to prosper over time.

Towards the end of the Edo period in 1850, the western part of Awaji Island was found to have potential as a production area because of its similarity in climate to Sakai. With the ocean to the west, in addition to favorable wind directions and temperature, Awaji was suitable for the drying process of incense making. The domestic industry developed when the monsoon season prevented fishing, and incense makers were born one after another. In the midst of all this, the Pacific War began, and changed the state of the incense industry.

The city of Sakai was burned down in the war.

Ironically, during a time when incense was needed for mourning, incense could not be made. It was during this time that many craftsmen from Sakai moved to Awaji.
“My grandfather was one of them,” recalls Mr. Shimomura. “Awaji Island was not hit by the air raids, so everything still remained.” Daihatsu was founded by Mr. Shimomura’s grandfather, Tetsuyama Shimomura, in 1936 in Sakai, and continued production in Awaji after the war.
In the mid-1950s, Awaji Island grew to become the largest producer of incense in Japan, and now accounts for about 70% of the national production. 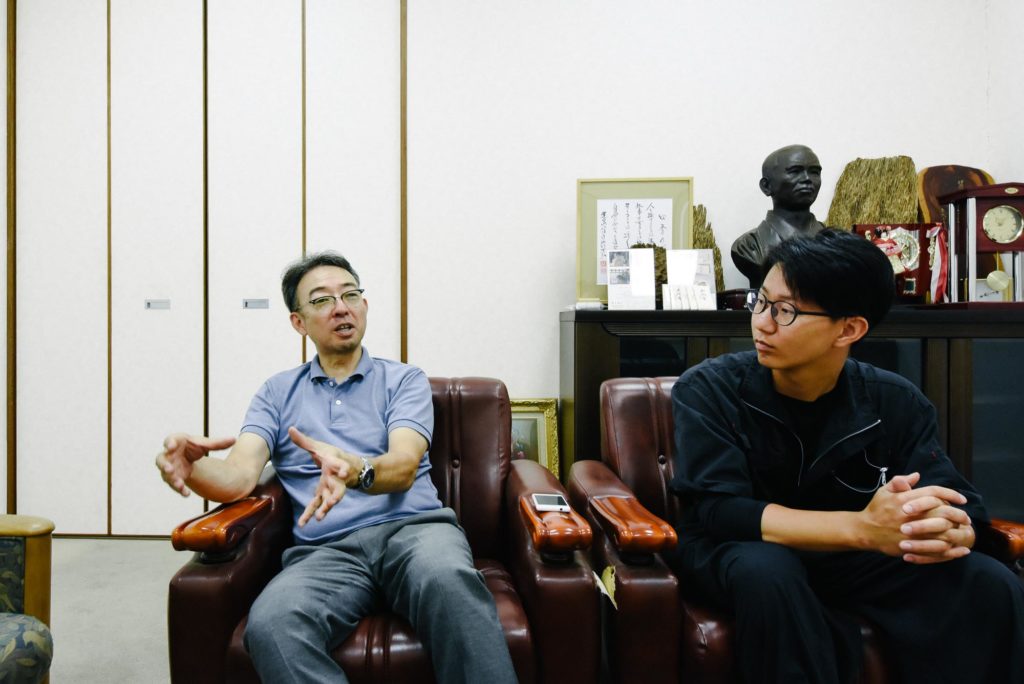 The Sensitivity of Incense Making

Daihatsu currently produces two types of incense – stick incense and washi paper incense, made by kneading the fragrance into washi paper. The main ingredient for incense is ‘tabu powder’, from the powdered bark of the Machillus Thunbergii tree (‘tabu no ki’), which has adhesive properties and burns slowly. The powder is kneaded with water to make clay, then blended with fragrant wood for the aroma, and dye is added for color.
“The properties of the powder change with every slight detail. To get close to my ideal end product, I have to repeat this process over and over.” 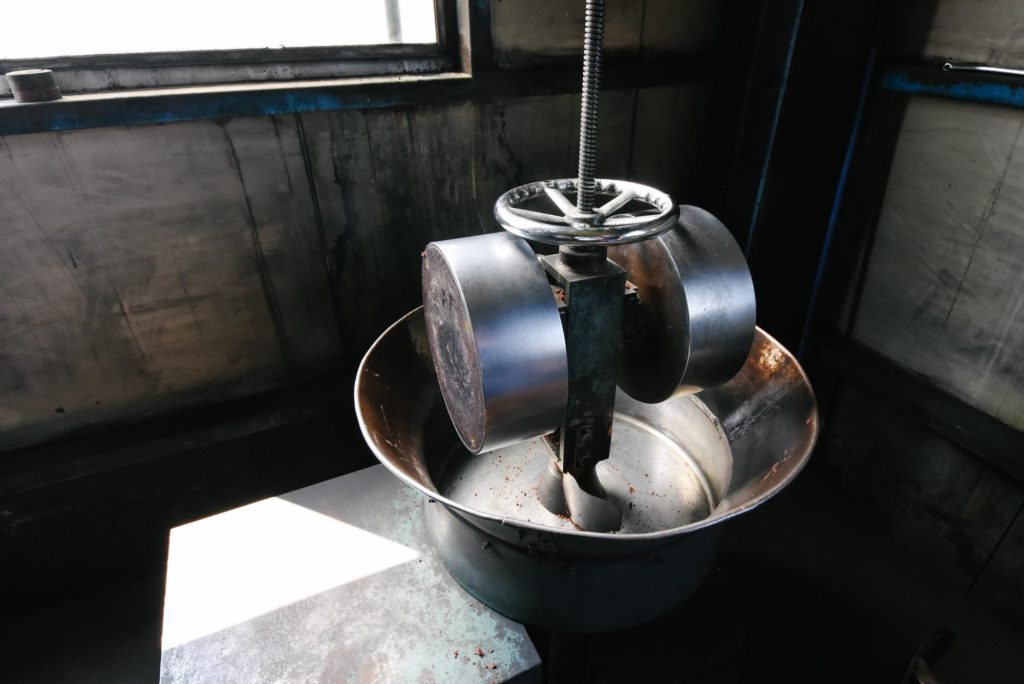 The powder mixing process causes powder to disperse, so it is carried out on a separate floor. 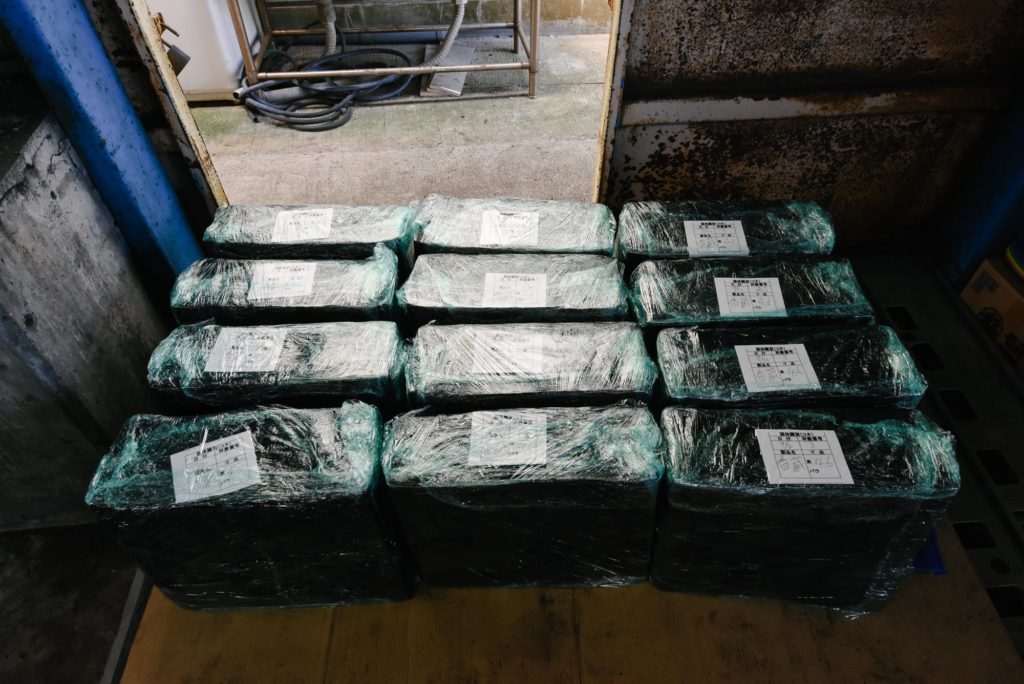 Blocks of clay are dried and shaped into incense sticks by a machine. 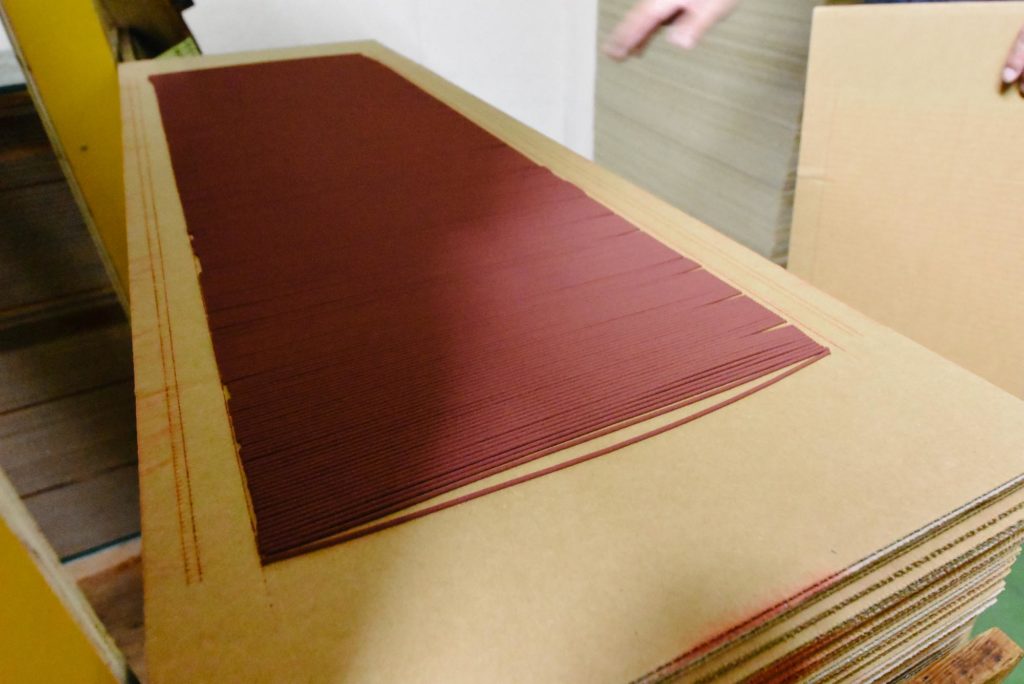 At the same time, the process of making washi incense also begins here. Once the incense blocks are cut into sticks, it is ground into powder using the same stone mortar used in soba noodle shops.

“Soba is a food enjoyed for the flavor of the ingredients, so the mortar used is created so that the original aroma is not lost,” Mr. Shimomura laughs guilelessly. “I think we are the only one in the country that does this.”
Alternatively, an electric mixer would raise the temperature of the powder, and using a pounding machine would disturb the neighbours. After much trial and error, they created their own production process.
Washi incense is made by filtering the end product with ‘kozo’ (paper mulberry), an ingredient used to make washi, and then dried. 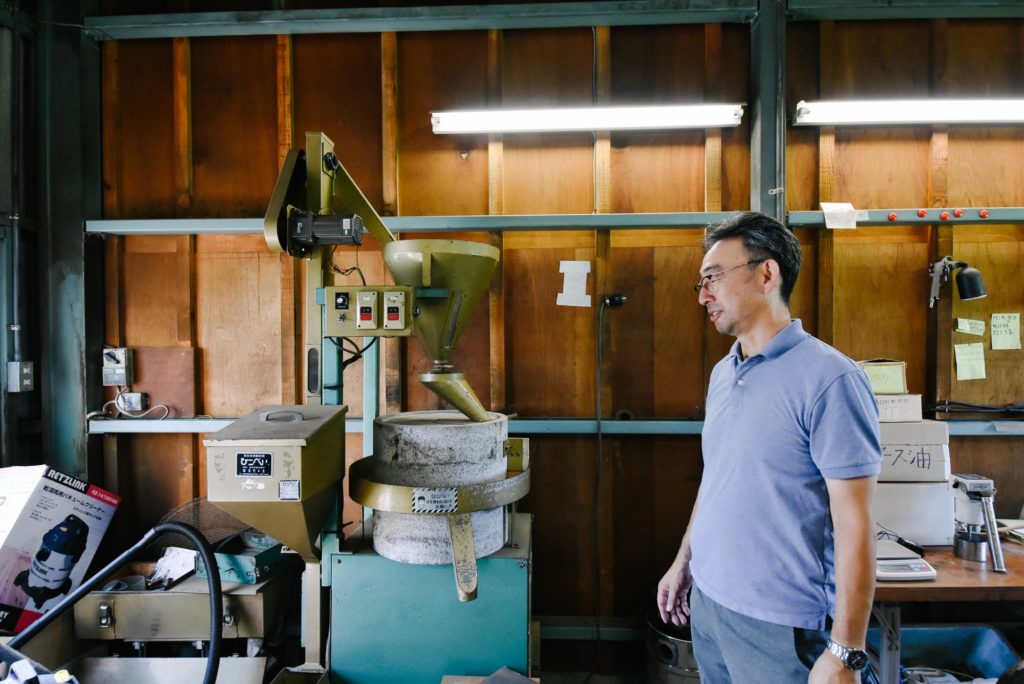 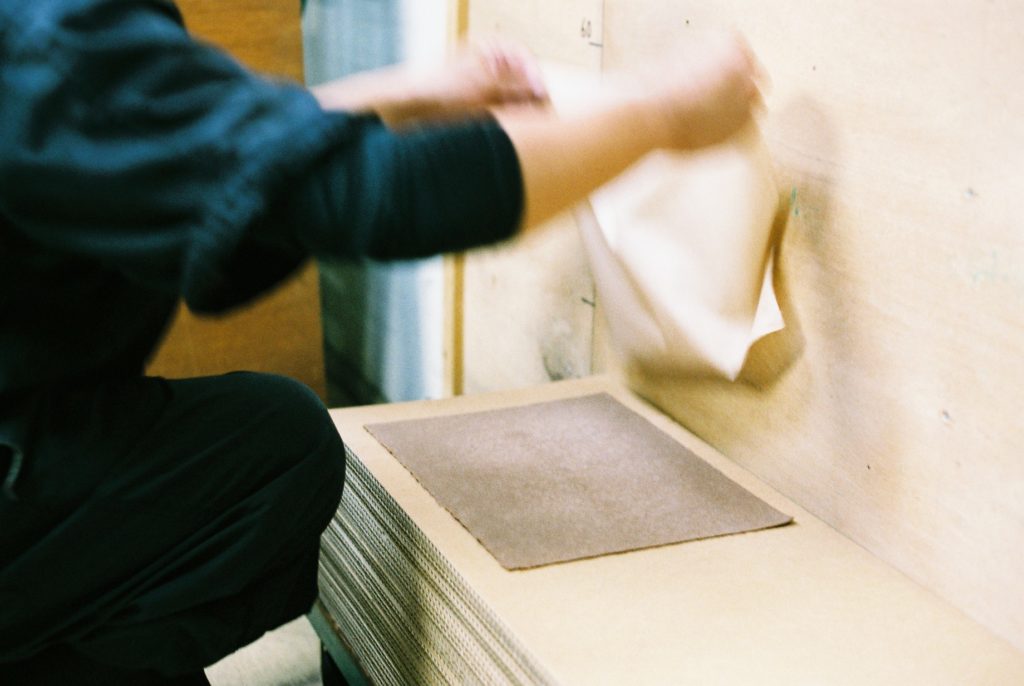 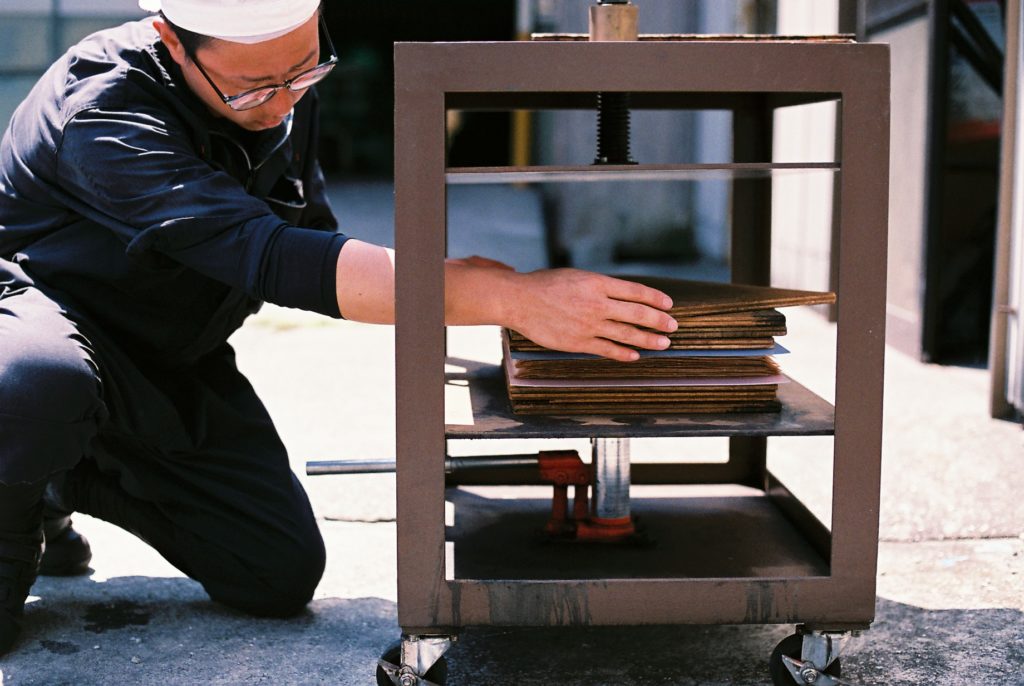 Gently pressing down to drain the liquid from washi.

The Complexities of Fragrant Wood

“The world of fragrant wood is truly a deep one,” Mr. Shimomura says, smiling enthusiastically.

What’s strange is that one cannot produce good fragrant wood by artificially damaging the tree. In other words, it’s a fragrance that can only be produced by nature. The growing of high quality fragrant wood is limited to India and Southeast Asia, and its value has continued to soar due to the CITES (Convention on International Trade in Endangered Species of Wild Fauna and Flora) import restrictions.
“If it’s high quality, it’ll cost over 1 million yen for a kilogram. The highest quality ‘kyara’ exceeded 100 million yen the year before last,” Mr. Shimomura chuckles. 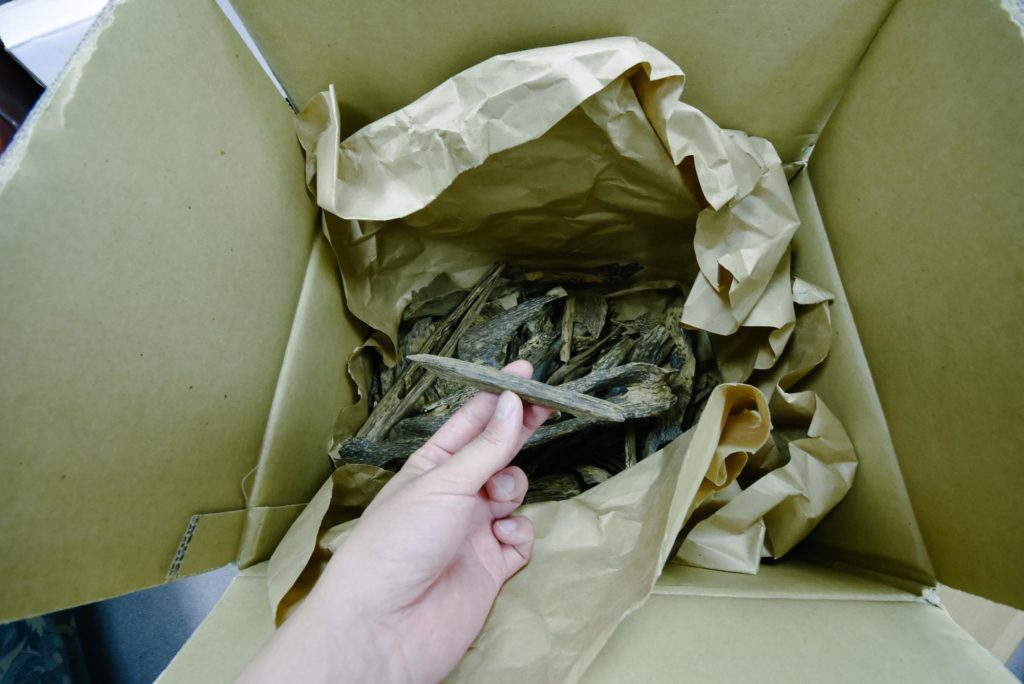 A collection of numerous fragrant woods. They produced a high-quality fragrance even when simply put directly in a fire.

Mr. Shimomura of Daihatsu developed a product called “hibi”, in collaboration with Kobe Match in Taishi Town, and TRUNK DESIGN. It was the first time for Mr. Shimomura to collaborate and develop a product with another company, despite being in the incense production business for so long.

“I think it was in 2011, I received a call from Mr. Sagayama of Kobe Match, who I didn’t even know at the time. He said he wanted to make incense matches. To be honest, I thought he was being absurd!” Mr. Shimomura recalls, laughing. How was he to make incense sticks – which are so fragile – strong enough to be used as matchsticks? At first, he had no idea how to go about producing something like this, but he had a feeling that a mixture between incense sticks and washi incense would work.
“We made prototypes and met every month. When things didn’t go well, we would comfort each other over yakiniku (Japanese barbeque),” He laughs again. “It took us three and a half years to complete the product, including the strength and safety of the matches, and the adjustment of the fragrance.” 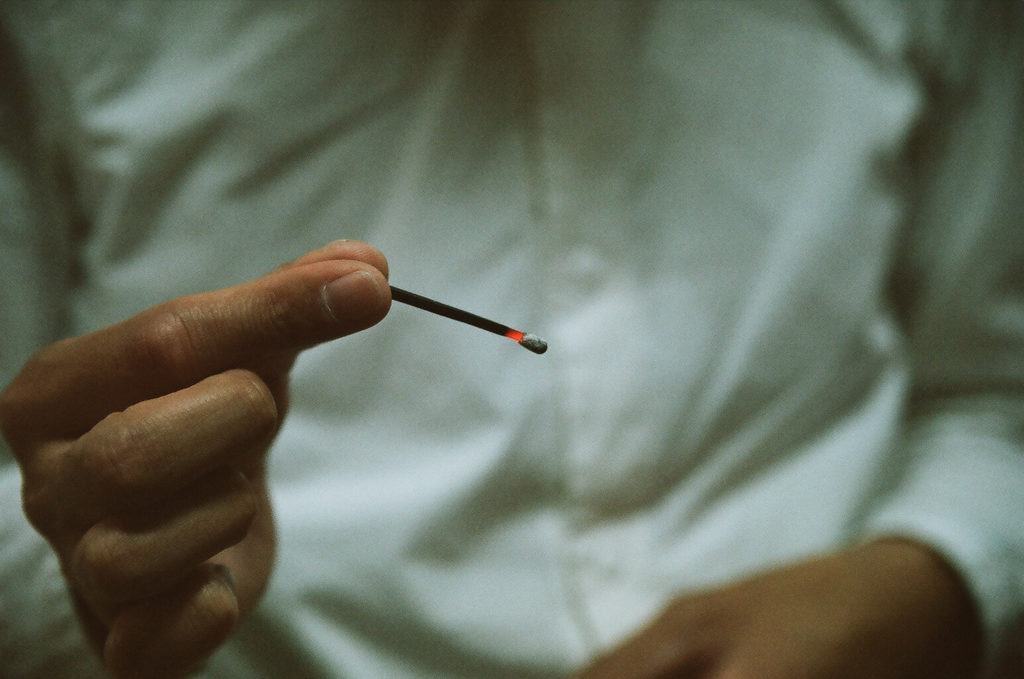 After countless trials and errors, “hibi” was completed.

As it was the first time for Mr. Shimomura to work with designers, and other manufacturing companies, he felt very uncomfortable at first.

“Even though I’m the professional when it comes to fragrance, everyone just voiced their own opinion,” he laughs. “But I guess that’s necessary to create something you can’t think of on your own.”

Looking a little embarrassed, Mr. Shimomura continues. “Others focused on the branding and marketing, while I concentrated on creating the body of the match. I’m naturally better at focusing on one thing at a time.” 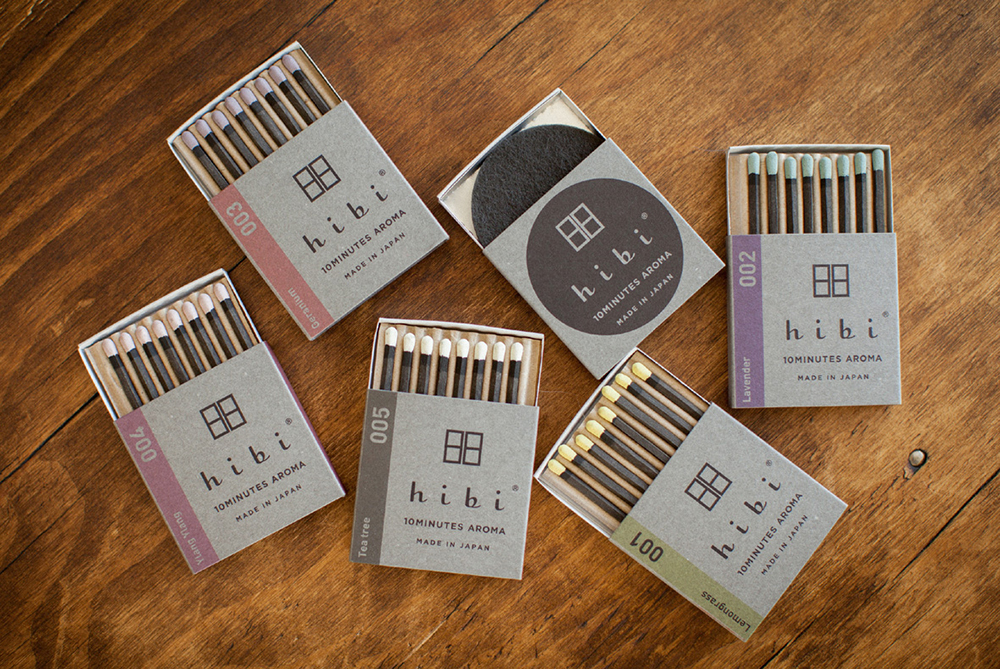 “hibi” has become a popular product and is currently sold in 28 countries around the world (as of August 2019).

Subsequently, Mr. Shimomura has worked with TRUNK DESIGN to produce and sell “ku,” a washi incense that releases fragrance even when not lit, and “Daily,” a standard incense for everyday use. “I look forward to seeing what I can do as a material maker. I would like to use incense to create new things.”

The demand for incense to be used in Buddhist rituals is declining. In these circumstances, promoting new lifestyles using incense as a way to enjoy fragrance are creating changes in the production areas. By focusing on the value of incense without being bound by tradition, we will definitely see a new tradition begin.

People like Mr. Shimomura, those who never forget to find the joys in life, are the ones who will pave the way for the future. Every once in a while, I stop, and I surrender myself to the scent of nature.