900 years ago, in this town of Taka, washi (Japanese paper) was produced. The more I thought it over, the more I am amazed by the vast history that spans this land. This piece of washi in front of me isn’t just a piece of paper, but within it, years of accumulated history and wisdom of our ancestors flow through its fibers. 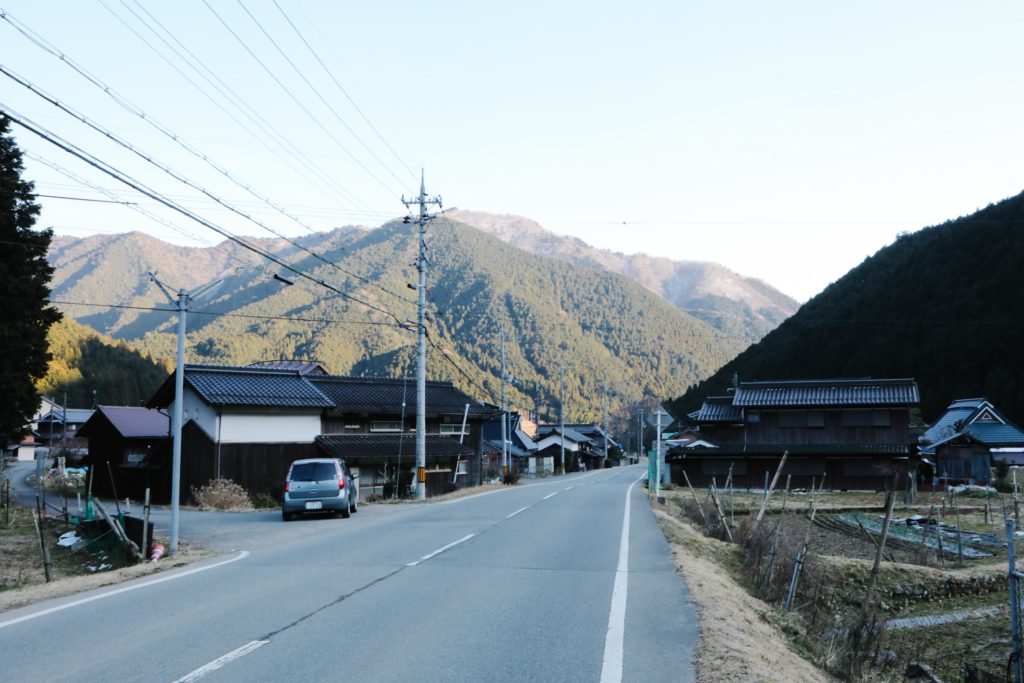 A view from Taka Town, where Sugihara Paper is made 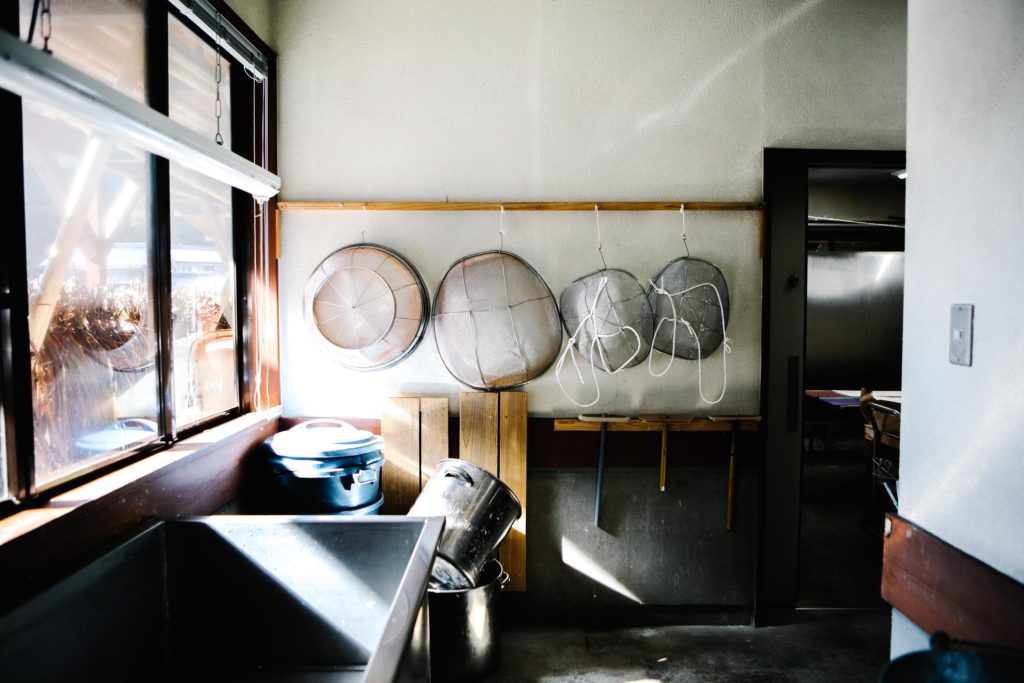 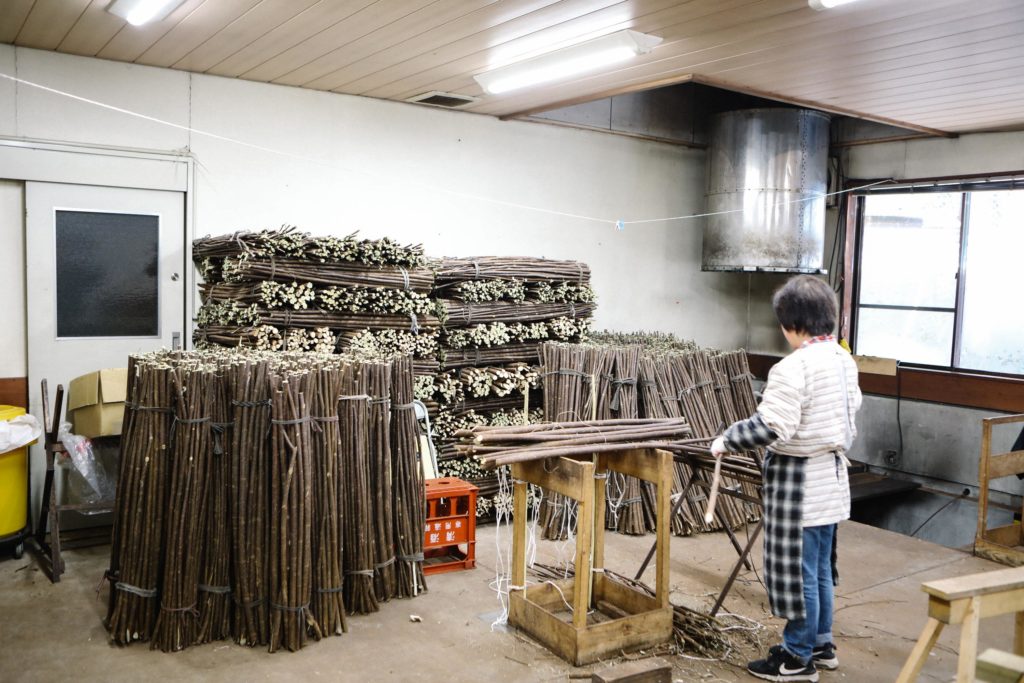 “Sugihara paper once ceased production, in the Taisho era.”

That was how Mr. Hisashi Fujita of the Sugihara Paper Laboratory began his introduction. 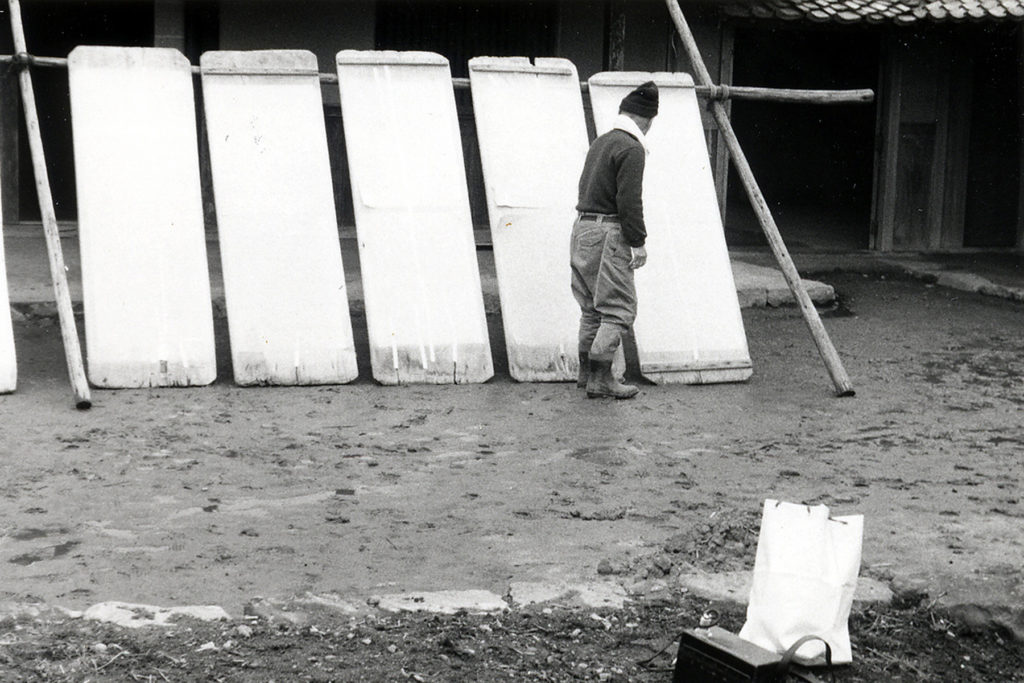 “In the Meiji era (1868-1912), Western paper gained popularity, and peasants began to make more money than papermakers. The last papermaker shut down in 1925.” Sugihara paper was then lost in the waves of the Pacific War and the period of rapid economic growth, and became nothing more than a mirage.
The same year the last papermaker closed, Kunio Yanagida, the father of Japanese folklore, published the first issue of the magazine “Minzoku” (meaning “ethnic group/people”). Fearing the loss of Japanese culture as the country was becoming modernized, he frequently made research trips to preserve its history. It was a time where the new replaced the old at a dizzying pace, and the lifestyles of people rapidly changed. 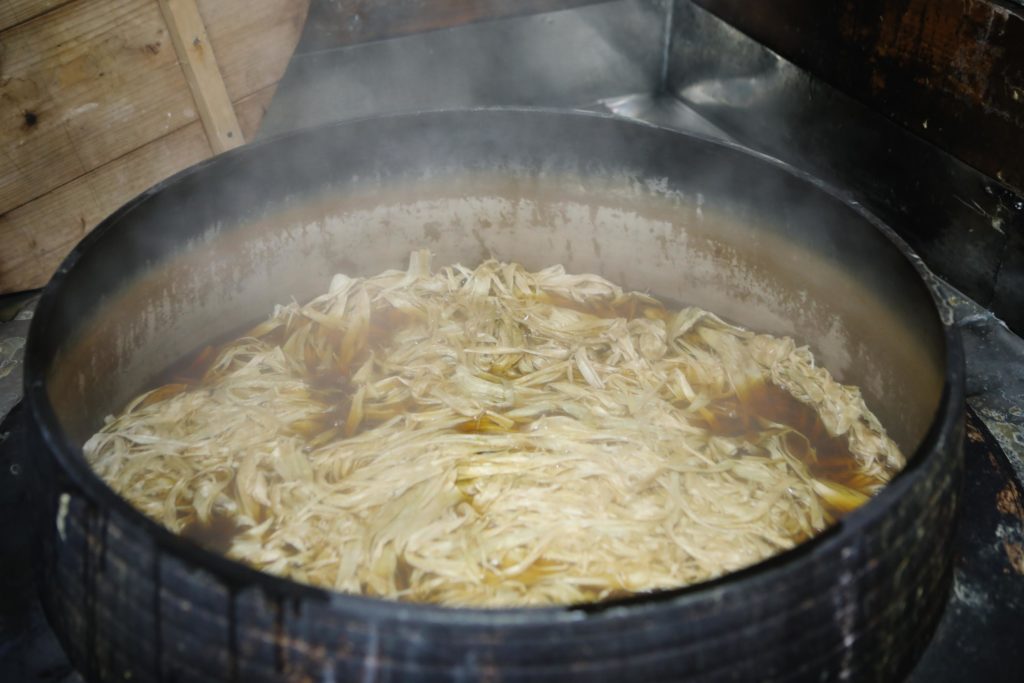 “Kozo” is boiled to soften the fibers 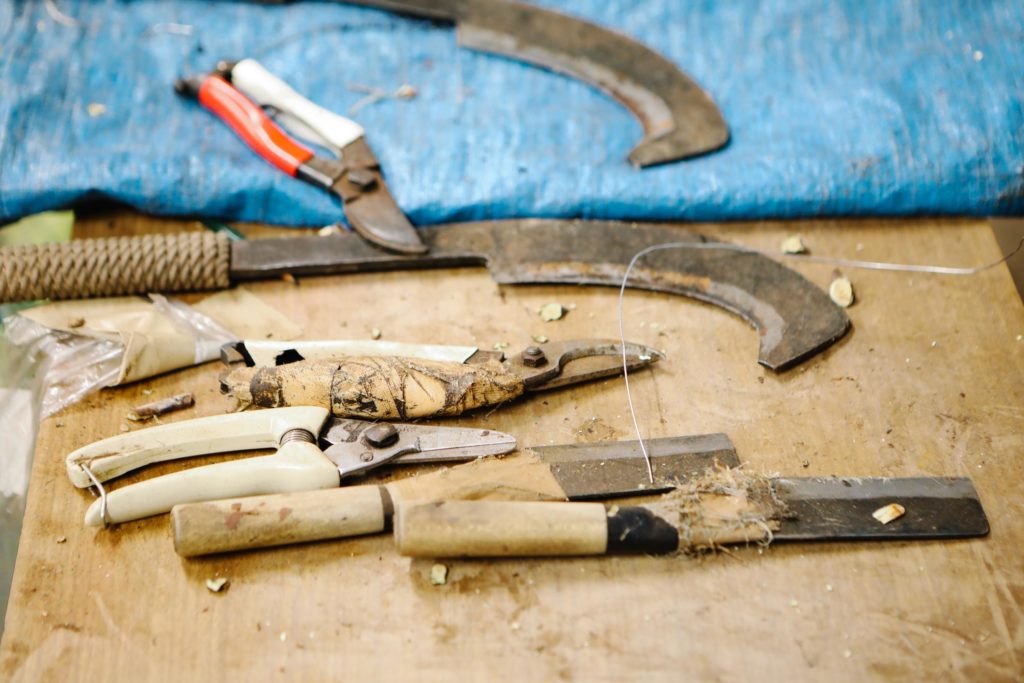 The Many Origins of Sugihara Paper

In 1970, the art of papermaking was revived in this small village for the first time in half a century. The success of its revival was partly attributed to the fact that some of the people were still craftsmen up to the end of the Taisho era (1912-1926). Two years later, Sugihara Paper Laboratory was formed with the technical assistance of other washi makers, like Kurotani Washi in Kyoto. 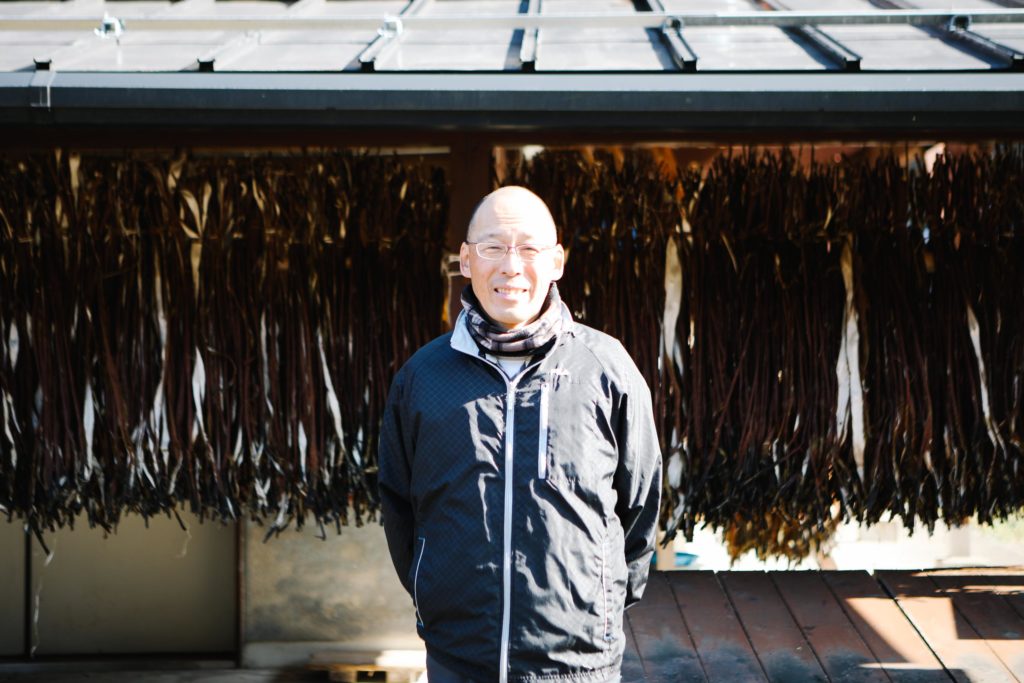 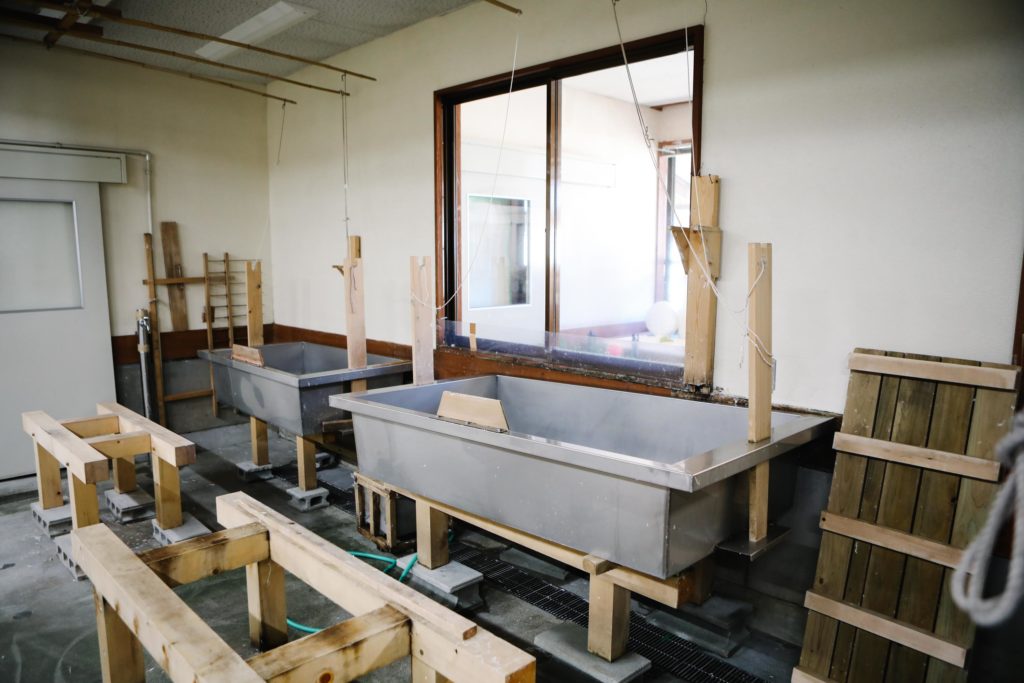 The Craftsman as a Salaryman

Originally a regular office worker at the town hall, Mr. Fujita joined Sugihara Laboratory in 2000 as the successor to a craftsman.
“I joined the company because I thought that making things on my own would be cooler than tapping away on a computer.” As a town-run establishment, he is considered a craftsman that’s employed by the town office. “But because it’s run by the town, we can make things to prioritize preserving the culture,” says Mr. Fujita. As a matter of fact, there was a deep passion for craftsmanship behind his actions. 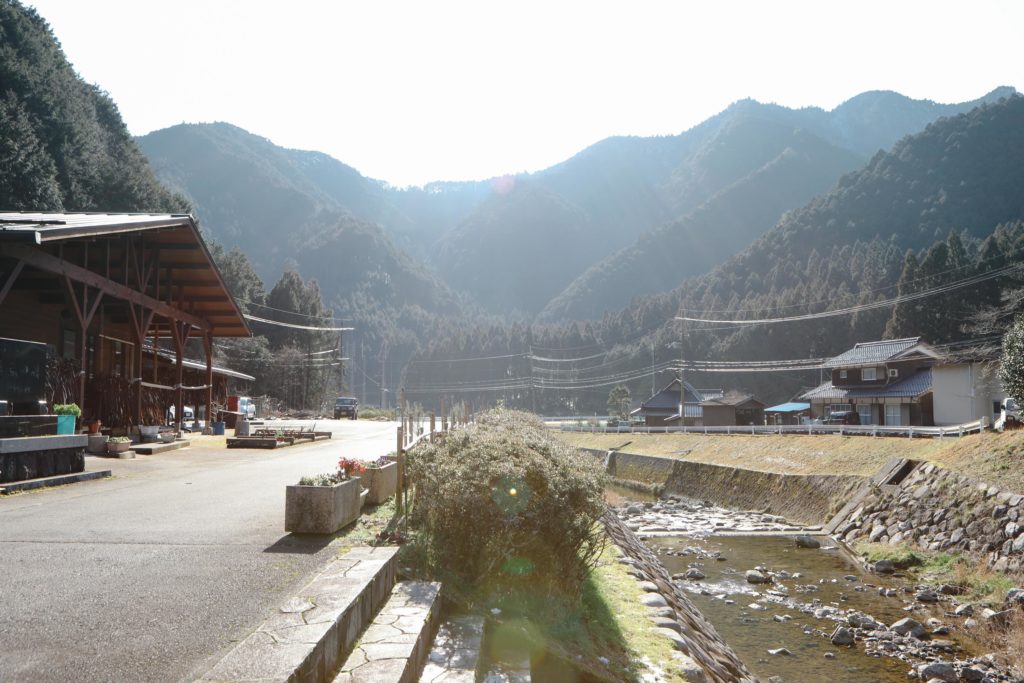 Revival Made Possible Because of the Town

The majority of “kozo”, the raw material used for Sugihara paper, is grown in Taka Town. While some papermakers source “kozo” from overseas or other regions of Japan, Sugihara Paper Laboratory sources from Taka, to develop an awareness for the characteristics of local timber.
However, getting hold of “kozo” is not an easy task. To remedy this issue, town members were asked to cultivate “kozo”, under a “one household, one plant” movement. It was then collected, processed, and made into paper by Sugihara Paper Laboratory. This kind of cooperation from the town has existed for some time, and though the population has decreased due to the aging community, they are still cultivating “kozo” under this movement.

Sugihara Paper Laboratory also inherited the “river washing” process, now rarely seen in Japan. The raw “kozo” is soaked in a river in the middle of winter for a day and a night utilize the cold water, sunlight, snow, and other natural elements to produce a purer, white paper. 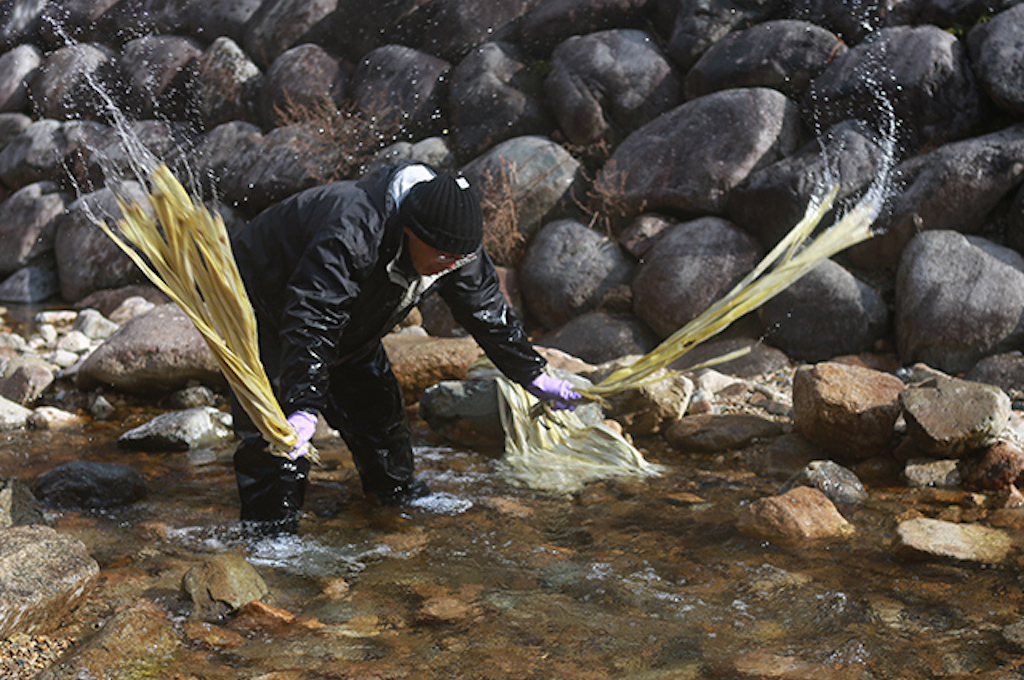 The key point of Sugihara paper is its natural whiteness. The material needs to be washed in the river during the freezing winter months, and rice flour, a historically valuable commodity is then added to make it even whiter. The result is natural white, that has an ethereal beauty distinctly different from chemically bleached paper.
Sugihara Paper Laboratory now takes bespoke orders, from wallpaper to origami paper, from letter paper to diplomas. Washi is more durable than regular pulp, so it’s perfect for producing something you’d like to treasure for a long time. 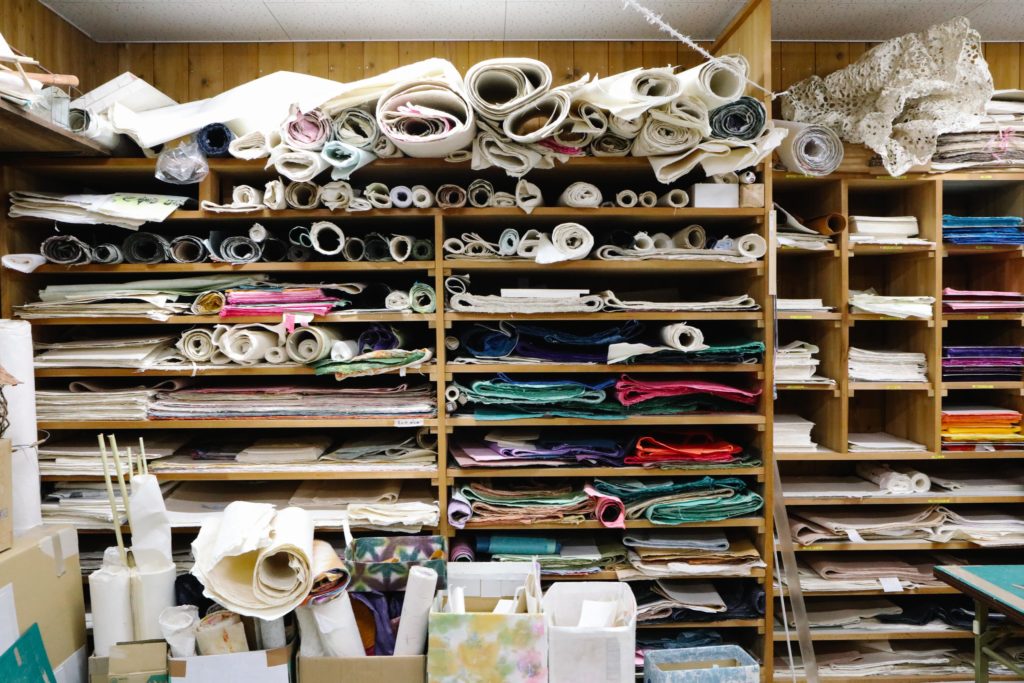 Past Sugihara paper products stored at the Laboratory, also for sale. 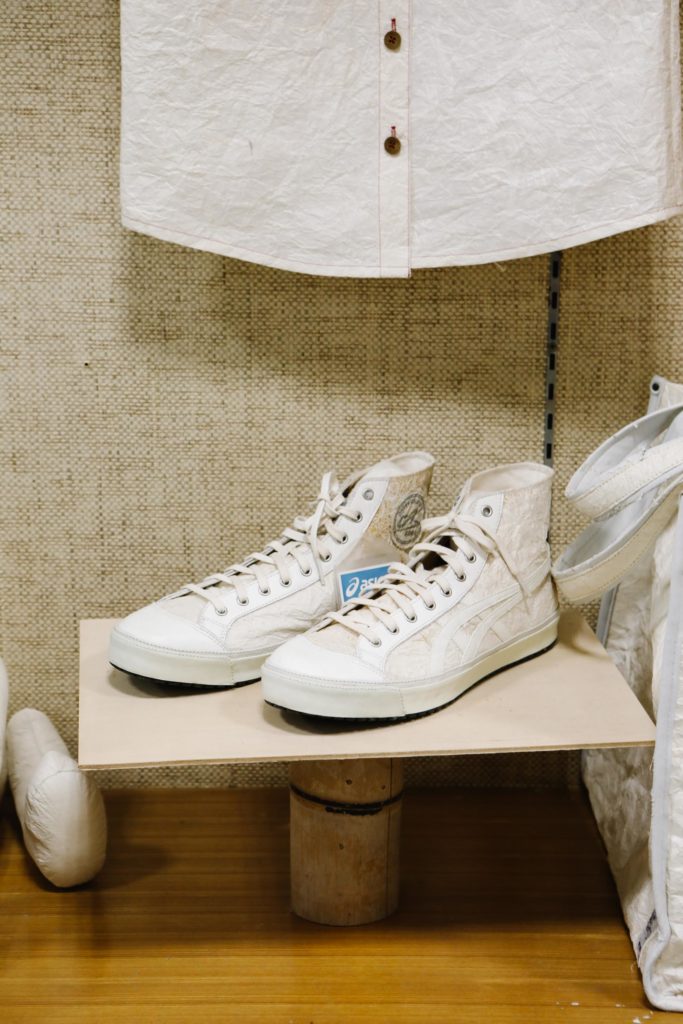 Hats, shirts, and shoes made from Sugihara paper archived at the Sugihara Paper Research Institute. 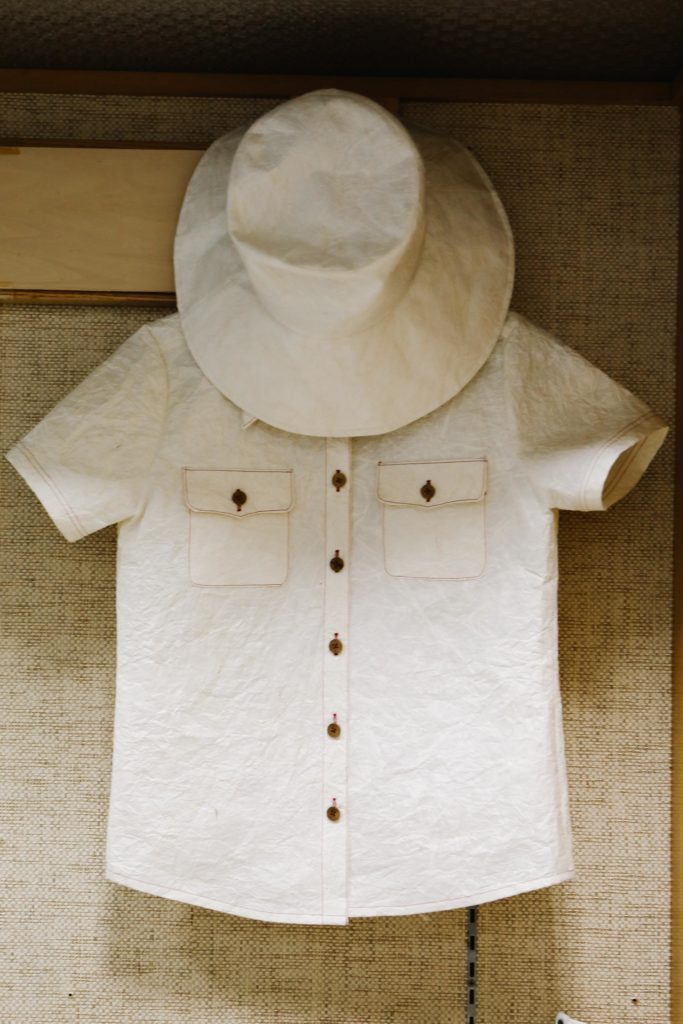 Centuries of tradition and techniques have been handed down by unknown craftsmen till today. Owing to how Sugihara was created through the cooperation of numerous people, there was no room for any single craftsman to stake their claim and make their mark as an individual. Yet, this is how such natural and beautiful pieces are created.
“We don’t have a product that is distinctly ‘Sugihara’. This is the challenge for us, as a maker.” Mr. Fujita admits. But it is in those words that the distinct characteristic of Sugihara paper, holding centuries of tradition, is revealed. 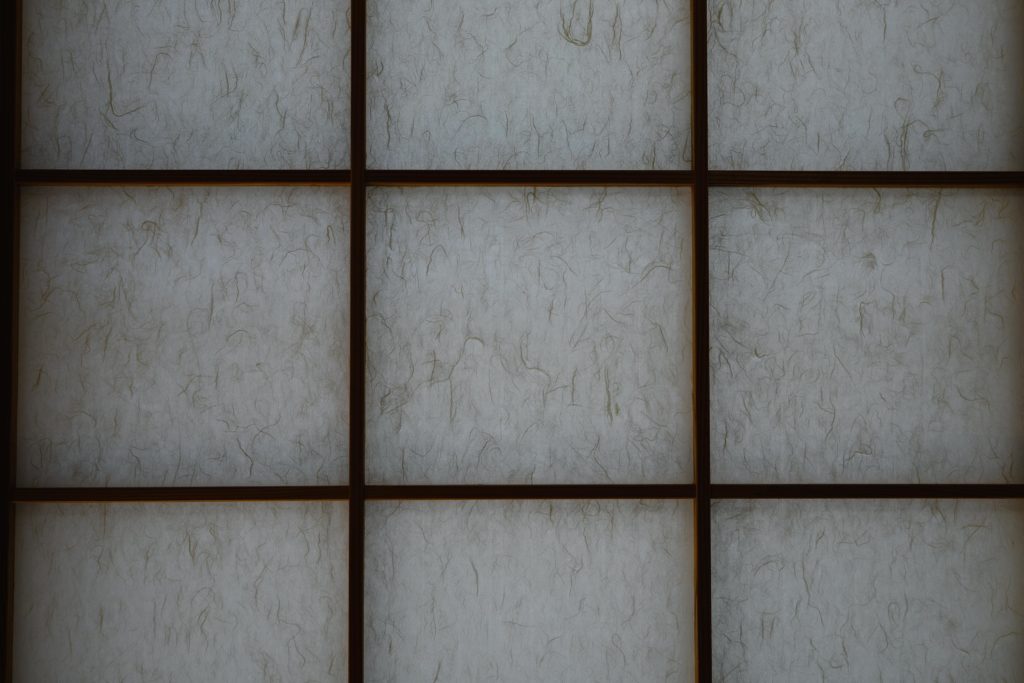 A shoji (sliding door) screen made with Sugihara paper. The natural pattern is clearly visible. 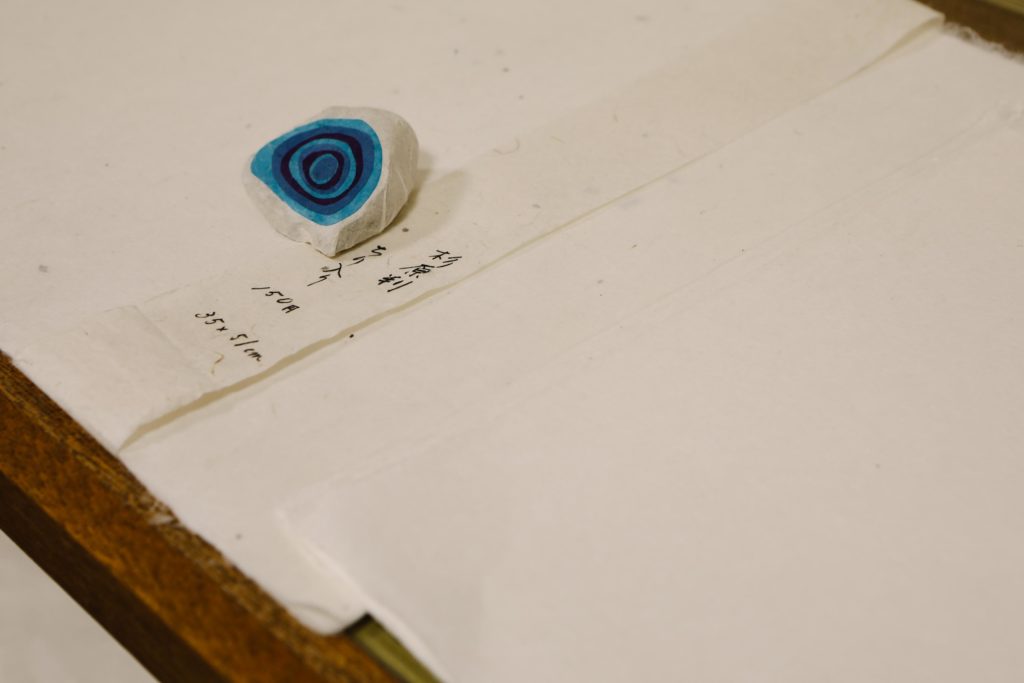 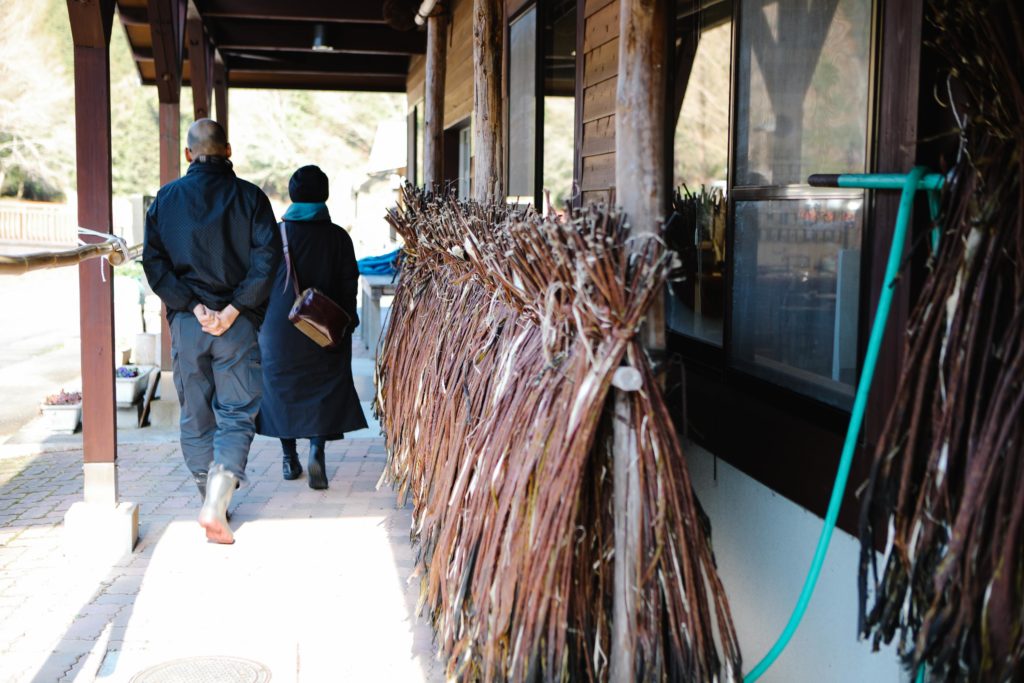