｜Ashiya City｜
Redefining Socks in Hyogo; The Necessity to Persist in Production [Part 2]

Inasaka Meriyasu Co., Ltd. is a sock manufacturer, established in 1927 in Kato City, Hyogo prefecture. The main storefront was opened in Ashiya City after the war, and the factory relocated after. It was at the relocated factory in Ashiya that “monoko” socks were first produced.

The moment you step into the factory, a variety of sounds surround you: the swishing of the air pushing finished socks out of the machine, the clicking of needles moving up and down, and the popping of a lid opening and closing as socks come out.

The tranquil atmosphere of the Ashiya City 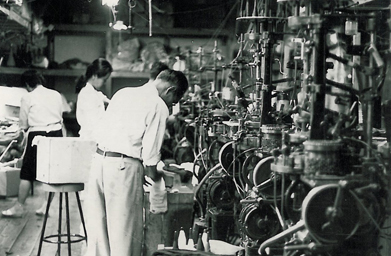 Back when Inasaka Meriyasu first relocated the factory to Ashiya 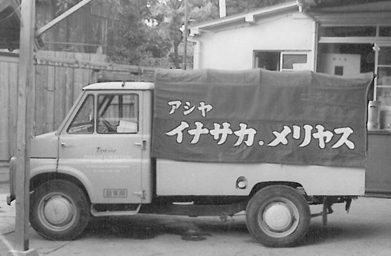 The Shift in Power within One Generation

“In my grandfather’s generation, the wholesale merchants held the most power. We couldn’t smoke in front of them, parked our cars at the end of the street, and then walked over to meet them.
In my father’s generation, the economy declined, so the merchants couldn’t fulfil their task of purchasing all the products, and only stocked and sent the goods when needed.
Gradually, the balance of power in the industry shifted, and us manufacturers came to have more power.”

The roof of the Ashiya factory, displaying flags from various countries.

In view of the power shift, they have begun to diversify their sales channels. “I have been burned many times in the past, by relying solely on wholesalers,” he reveals. “We can’t be too blatant because of the various relationships we have, but we’re now selling directly to business stores and franchises, and we’re also developing our online store.”

They have also merged with wholesalers they worked with before, in Tokyo and Osaka, who were about to go out of business. Having the knowledge of a wholesaler, they further expanded their sales channels and networks.

The world of manufacturing itself has also changed dramatically. Currently, over 90% of the company’s socks are manufactured in factories in China. “China has an image of being cheap labor, but the appeal is that we can use the latest machines there to produce the variety of socks that we can’t in Japan.”

The planning and design is done in Japan, and with the exception of a few items, the products are manufactured in China, then are sold both domestically and internationally.

Mr. Nakatani, a craftsman who joined the company when he was 15 years old and continues to work at the age of 74. Yes, he was the first craftsman to make “mokono” socks.

Why Continue Manufacturing in Japan

When asked, “So, why do you even continue manufacturing in Japan at all?”, there was an unexpected answer.

“For the children of the town.”
In the past, there were a diverse number of factories in this town, like knife factories or bakeries, but they all shut down after the Great Hanshin-Awaji Earthquake.
Mr. Inasaka explains, “All eight elementary schools in the city must come to Inasaka Meriyasu as part of their social studies curriculum. Because Ashiya City is an ‘international cultural residential city,’ it is meaningful for us to manufacture products near children.”

As Mr. Inasaka shares his story, it dawns on me that it wasn’t that they didn’t have the option to move the factory out of Japan. The fact that they are still in operation now, despite surrounding factories disappearing rapidly, he felt that it was necessary to stay on, to be remembered, and to share the importance and joy of manufacturing to the future generations.

The history of the socks began with the cultivation of cotton in Hyogo, and has contributed to the culture of sock usage today. It created the high quality of manufacturing in post-war Japan, and now we are in the midst of shifting to a new business model for this era, where manufacturing volume has passed its peak.

We are changing up what defines “quality”, the manufacturing methods, where and how products are sold, and the materials used. At first glance, the process seems burdensome; more manpower is required whilst fewer batches are produced. By trying out small, interesting products, we may have a chance to listen to the voices of users, getting new ideas to keep up with these changing times.

This is the vision of “monoko”, a company that explores new needs, to create products in the local community. It is not a large company, but a partner who is willing to venture into uncharted waters together.
No matter how big the change, it always begins with a small step.
What lies ahead for this initiative?
On a cold morning in early spring, I put on my “mokono” socks and feel the warmth on my feet as I ponder.